Keynote Notes from the Global Education Technology Summit in Beijing

From one Olympic park in London, to the Bird’s Nest in Beijing. I’ve arrived for my first trip to China. Here are my notes from the first keynotes at the GET Summit.

Chujiu Mei, Founder, JMDEDU:  improving search between educational supply and demand and broadening the understanding of who is an educator

The inspirational Chujiu Mei kicked off with her opening speech calling for an end to pedagogical absolutes stating: “there is no such thing as absolute right or absolute wrong”. However, reviewing all the slides from hundreds of speakers for GET she noticed a lot of similarities.

More on AI in education here (I moderated a panel on the subject out here). But an interesting similarity between this summit and Hundred Summit in Finland where I was last week: there is a blurring of the lines on what constitutes an educator in the internet age.

Chujiu Mei, who comes from a training background, says: “Do we really have inside/outside industry? Maybe you are educators?”

(Indeed user-centred design proponent, Nancy Xu, Founder and CEO, Cevolution also talked about educators as designers; “If you are creating something of use you are a designer”)

GET Summit is largely focused on the after-school sector of education, so it is not surprising to see a broadening of the term educator among this crowd which is more direct-to-consumer and internet-resources focused.

But last week, Saku Tumoinen, Founder and CEO of HundrED and advisor to the Ministry of Education in Finland, purposefully referenced the 200 attendees at the HundrED summit as educators. (The crowd was a mix of formal teachers and entrepreneurs in edtech, some from an NGO background and some more straight-forwardly commercial but with strong pedagogical underpinnings.) My take is I dispute the idea that we can’t learn from non-teachers, but I respect the need for deep pedagogical understanding. (Which is why I like the approach of the International Learning Technologies Standards Committee AI chapter who are trying to buddy up the disciplines of developers and learning experts).

In Finland, the move to a more expansive idea of what makes an educator has unsurprisingly met with some resistance in the media and, back in China, Mei mentioned the need to retain social value, not just commercial value:

“In China we might say, “The wise people make money in the wise way.” – Chujiu Mei, Founder, JMDEDU

For China, education and entrepreneurship is a major focus for the nation. President Xi Jinping has stated “Once we have a booming educational sector the nation will thrive.”

Changing education is hard though and it takes a long time. Chujiu Mei again:

“We will have the butterfly effect. The small but beautiful change – we are all within the dynamics of this system. We can grow a forest by planting one tree after another. Whenever I bump into a problem in the educational sector I think it’s too hard, but then I find a solution. And we repeat this process again and again.”

It is interesting to mull over the multi-layered role of internet companies in “delivering” education. Mega-company Tencent are providing Tencent class room for 50,000 education providers in China. At the same time, they are offering the cloud capacity which is fuelling some of China’s Edtech Unicorns. For example, English Language platform VIPKids have 40,000 teachers working at any one time online and Tencent provide the cloud capacity. Like Facebook’s project to provide mini-classes on technology in an aim to reduce the digital dividend gap, Tencent also provide classes explaining technology on subjects like Cloud, AI and IOT. They are positioning their brand as morally solid and ready for the education play:

“As a responsible internet company, we want to be a digital assistant to the classroom.”

With AI as a trend in education, and dependent on processing power, the back-bone of the systems in China will be an interesting one to watch.

Singe Zhou, Parents General Manager, TAL: supporting parents to move past the Gaokao to holistic support for their children 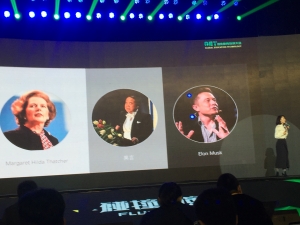 TAL reminded the GET Summit audience on the instrumental nature of parents in educational and life-long success. Outside of school, “the larger majority of the iceberg belongs to household education.” They referenced Margaret Thatcher on her father’s influence, “he taught me to have my own opinions of the world” and Nobel prize winner, Mr Moyan on his mother’s lessons on “how to be inclusive” and Elon Musk on his mother’s support of his aspirations.

TAL issued a student survey which had 180,000 participants. It deduced that 49% of 8th graders stated that having a warm family environment was the most important factor to their life experience. Only 1% said that social status was the most important thing. On the flip-side, however, 95% of parents asked about their children said that their hopes were that their “kids were above the mid-level of kids academically.”

Yet TAL said that when it came to the psychological care of their kids, those surveyed were lacking. 21% of parents never talk about what happened at school; “What the parents are giving are not what the kids need”.

Their services, delivered across popular platforms like WeChat, are working to bring together the following services and support for parents to develop holistic education for their children covering:

Lesson: note the emergence of these softer Panda Mums vs. the traditional Tiger mums. This transition is very much a transition still though, with many other panel discussions still highlighting the central driver being exams.

Dada was just one example where facial recognition technology was used to monitor the effectiveness of a teacher’s delivery of content and a student’s engagement. Dada talked about how better online courses and edtech might assist children with ADHD and/or dyslexia (Something we covered in episode 48).

The interest in remote monitoring of classes, students and teachers was discussed among attendees , with some pointing to concerns around who gets the data if a student is less than “optimum” in their attention (parents?) and what the outcomes of this might be. The psychological implications of being “always on” and performing  – either as a student or teacher – might be troublesome as well. We know how important it is to rest and reflect and to feel comfortable that all emotions are part of the human make up. Let’s see how this application of AI develops! In stark contrast to the softer panda mum view, and indicative that exams, behaviour and output is still paramount and monitored to the hilt. 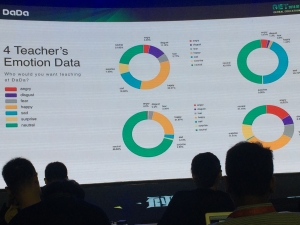 LikeLoading...
Incentives to base your edtech company in the ZMTB building in Beijing #134 – Edtech Cheer